Beyond 'Religion versus Emancipation’

In the Netherlands the term ‘Islam debate’ has been coined, in which Dutch ‘norms and values’ are constructed in opposition to those of Islam. The two, as debates conclude, don’t mix, specifically in terms of the emancipation of women.

At the same time about 500 Dutch people convert to Islam every year, most of them are women. If the ‘norms and values’ of the Netherlands and Islam supposedly don’t mix, what effect does that have on these women? From: “Delfts Blauw Meets Hijab”, Vimeo. 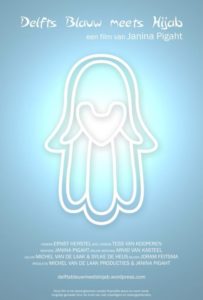 In the context of our research programme on Religion and Emancipation, we kindly invite you to a screening of the 2010 documentary by Janina Pigaht, called “Delfts Blauw Meets Hijab”. After the documentary we will have a critical conversation with the director of the film and scholars who study conversion in the European context.

NOTE: The documentary will be in Dutch, with English subtitles. The discussion will be primarily in Dutch.

Admission is free of charge, but registration is required using the form below. The program will start at 19:30 at the Louis Hartlooper Complex in Utrecht, details will be emailed after you register.